Not Included: Land Portion - travel/cancellation insurance, gratuities to guides and drivers.
Cruise Portion - Port taxes & service charges. ($180 will be added to your final invoice to prepay this cruise charge)
Flight Departures - Special fares are available nationwide including transfers. (transfers not included unless airfare is purchased from Pilgrim Tours)


Please Note: Additional optional shore excursions can be purchased on tour prior to cruise embarkation. See above link. 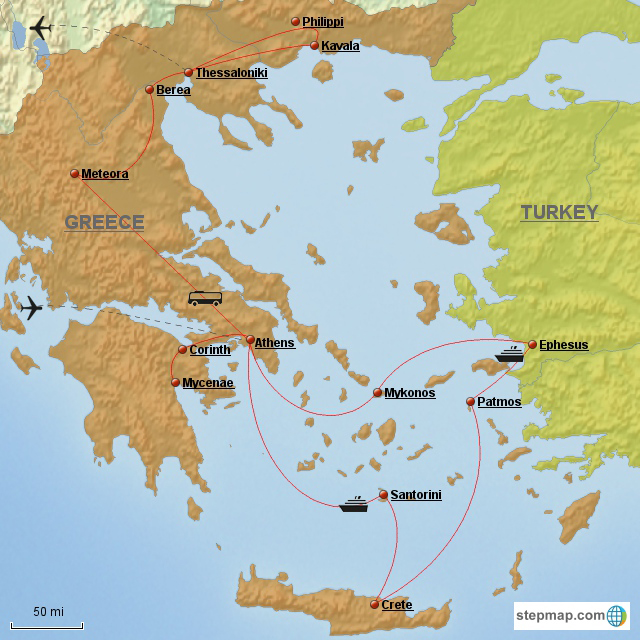 We sail this morning from Athens to the quaint isle of Mykonos, called the island of windmills. Experience the waterfront lined with shops and cafes and then stroll the charming walkways through a maze of whitewashed buildings before returning to the ship for dinner and evening entertainment.

Docking in Turkey, enjoy a tour of Ephesus, the city of the Bible and one of the largest restorations still in progress with miles of ancient treasures. Ephesus was once a thriving port town of 250,000 people. Today you can still see the spectacular excavations of the major streets in this ancient city including the Agora, the Odeon, the Library, the marble-paved main Street, the Baths, Trajan’s Fountain, the Residences of the Patricians, the Prytaneum, and Temple of Hadrian. The Great Theatre, built in the 4th century B.C., could accommodate 24,000 spectators and it is famous even nowadays for its acoustics. This afternoon we visit the Isle of Patmos, under statutory protection as a historic monument. Here we have a tour to see the fortified monastery of St. John and the cave claimed to be where John received the Revelation. Back on the ship, enjoy the Captain's dinner before settling in to your cabin for the night.

Please prepare for a dress code today. In Meteora, women are required to wear skirts below the knee and men, pants.
From Athens, our tour travels northward past Thermopylae where we learn of the famous Spartan battle of 300. We continue through the mountains to Meteora. Here we see the world famous Byzantine monasteries that are perched precariously on summits of gray rock pinnacles of varied and beautiful shapes. Their history goes back to the 14th century when the monks sought refuge in the cliffside caves then fled higher to build the original wooden shelters, later transformed into monasteries. Our lodging this evening will be in Meteora.