Please Note: Turkey Entry Visas* must be secured in advance prior to arrival. Visas can be obtained in advance online at the link below. 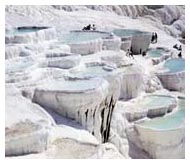 Arriving in Denizili, we transfer to the spa village of Pamukkale, our lodging for the next two evenings, where the remainder of the afternoon is free for you to relax and enjoy a leisurely dinner.

Philadelphia was referred to as the "New Jerusalem" (Rev. 3:7-13) in the Book of Revelation, yet today, not much is left of the city except for the ancient wall and the remains of a Byzantine basilica in the modern city of Alasehir. Sardis was berated by John for its facade of strength when in reality; it was weak (Rev. 3:1-6). Here coins were minted and the dyeing of wood originated. We'll visit the gymnasium and synagogue. A stop will be made in Thyatira to view the ancient roadway and period columns. Izmir is the third largest city in Turkey and a long time center for Jews and Christians. In Paul's day, Izmir was known as Smyrna and was another of the Seven Churches (Rev. 2:8-11). Here we'll see Polycarp's Church and the ancient agora. Our lodging the next two evenings will be in Izmir. 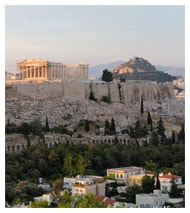 Once a busy trading center and famous as a "seller of purple," the most favored of the Seven Churches, the church of Pergamum was praised for its forbearance (Rev. 2:12-17). It was here that the first Christians were executed by Rome. We'll visit the fabled Acropolis, pass through the Royal Gates, view the foundations of the Temple of Zeus and visit the ruins of the library, which once held 200,000 volumes. We continue our sightseeing in Alexandria Troas, which was once a city with tall buildings and a major port on the Aegean. This is noted as the inspiration and beginning of the spread of Christianity into Europe. It was here that Paul had a vision during his second missionary journey and was called to Macedonia (Acts 16:8-13). Paul later spent a week in Troas preaching here and Eutychus was resurrected (Acts 20:6-12). Our lodging this evening will be in picturesque Çanakkale.

We set off traveling west to Greece. After a drive across the area known as “Trace,” the European portion of Turkey we arrive at the border. Continuing on we arrive in Kavala, Greece's prettiest mainland port with a most elegant harbor. Paul landed here with his disciples, Timothy and Silas. Luke, the Evangelist, also came here from Troas. This ancient city of Neapolis was later renamed Christoupolis because it was the first European city to accept Christianity. Imagine walking on the same sod as these men of the Bible! We will see the Roman Aqueduct and the ruins of the Acropolis in this beautifully located city, known since the 5th century as Kavala. We overnight in this lovely seaport town.

This morning we make the short trip to Philippi where Paul preached his first evangelical sermon and baptized the first Christians on European soil. We will view the baptismal site where Lydia surrendered her life to Christ and visit a crypt dating from the Roman period that is thought to have served as a prison for Paul. See the famous Acropolis, the Market Place, Basilica, and the Theatre. We travel west following the coast arriving in Thessalonica, Macedonia the evening. The New Testament books of I & II Thessalonians will come alive to us today. En route to the hotel we will view the old city ramparts; the newly excavated Forum, St. George Church, an ancient Roman monument which was transformed into a church and the Galerius Arch which rises over the famous Via Egnatia. We visit St. Demetrius basilica, dedicated to a distinguished member of the Roman army and a martyred Christian convert before arriving at our hotel for the evening in Thessalonica.

A stop will be made in Berea to view the ancient synagogue where Paul spoke and the Bema surrounded by mosaics of Paul and the plaque of scripture regarding the "more noble" church. Driving through town we see remnants of the original Roman road that spanned the nation during Paul’s time. We also visit King Phillip's (Alexander's father) tomb in Vergina, one of the most outstanding finds in all of Greece. The exhibit includes many items including intricately designed lavish gold crowns designed for the royalty of the day. This afternoon we continue southward past Thermopylae and on to the city of Athens, the birth place of democracy and our home for the next three nights. 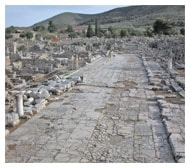 We begin our day with a visit to the Acropolis, the Parthenon, and Erectheum before viewing Athens atop Mars Hill where Paul stood and preached the truth to the Gentile nation. The remainder of the day is free with many things to do and see. A short walk from your hotel is the famous Plaka with a multitude of shops and cafes.