Greece tour, cruise fares and airfare; based on double occupancy

Included with Greece tour and Cruise

Not Included with Greece tour and Cruise

Arrive in Rome. We visit the ruins of Ostia Antica, which provides an excellent example of city life in classical times and the Ostian Gate, today called the Gate of St. Paul. This afternoon we will take a tour of the Catacombs where thousands of Christians were buried in a remarkable tiered series of galleries. Transfer to the hotel in Rome where you will spend 3 nights. Lunches and dinners in Rome are on your own.

We begin our walking tour at the ancient Roman Forum, where our guide will divulge its secrets. We will visit the Arch of Titus which commemorated the sack of Jerusalem by Titus in AD 70. We will tour the Mamertine Prison exterior, where tradition says the Apostle Paul was imprisoned. The Roman church would say that Peter was imprisoned here as well, but there is no imperial evidence that Peter was ever in Rome. Next, we visit the Coliseum, where thousands of people and animals perished during gladiatorial games. The Coliseum first opened in AD 80 and within 100 days of its opening, 5000 wild beasts perished here. The slaughter of both humans and animals continued for three more centuries. Historians believe the Coliseum could hold between 40,000 and 80,000 people depending on how close the seating was. The floor has recently had a plank placed over the middle making it accessible for people to walk over the labyrinth of brick cells, ramps, and elevators used to transport animals and gladiators into the arena. Hear the stories of the games that have fascinated people for hundreds of years. Continue to downtown Rome for a walking tour that includes Piazza Navona, Trevi Fountain, the Pantheon, and the Spanish Steps.

This morning we will visit the the Abbey of the Three Fountains, the traditional site of Paul's martyrdom and the ancient street that he walked on. Continue to Palatine Hill which is an open air museum that which housed imperial palaces and the nucleus of the ancient Roman empire. Continue to St. Peter’s Square and Basilica to see where the Pope has addressed the crowds. Enjoy some free time to explore Rome on your own.

Transfer to the Rome airport for a flight to Athens where you will meet up with the rest of the group.

Arrive in the Athens Airport. Transfer to the hotel where you will spend 3 nights. Dinners in Athens are included at the hotel. Lunches are on your own in Athens.

Full day tour of Corinth including Quick stop at the Corinth Canal. Then on to Corinth… the Agora, the Temple of Apollo, the Roman Odeon, the Bema and Gallio’s Seat. Lunch on your own at a local restaurant. Include the acropolis of Corinth. On the way back to Athens, quick stop by the port of Kehreas, where Paul sailed for Ephesus.

Full day tour of Athens, the foundation of democracy. We visit the Acropolis, the Parthenon, and Erectheum before viewing Athens atop Mars Hill where Paul stood and preached the truth to the Gentile nation. From atop Mars Hill we walk down to the Agora, the ancient marketplace and center of Athenian public life. Enjoy a visit to the Acropolis Museum which houses over 4000 objects that were found on the Acropolis hill and slopes.

This morning visit the Panathenaic Stadium whose marble structure has hosted events such as the 2004 Olympics and the finish of the Athens marathon. Take a funicular ride up Mount Lycabbetus for a breathtaking view of the city. This afternoon transfer to the pier at Piraeus to board the cruise ship.

Board the Norwegian Cruise Lines Pearl ship this afternoon. Enjoy all the meals and amenities offered on this modern cruise ship. Sail out tonight towards Turkey.

Arrive in Kusadasi, Turkey this morning. Visit to the Ephesus Archaeological site. Ephesus was once a thriving port town of 250,000 people. Today you can still see the spectacular excavations of the major streets in this ancient city. We view the Library, Agora, theatre, colorful mosaics in the aristocratic Terrace Houses, and a panoramic outlook of the surrounding ancient port area (including a wealth of church history and cultural insight). Return to the cruise ship and sail to the Greek island of Patmos, which is under statutory protection as a historic monument. Here we have a tour to see the fortified monastery of St. John and the cave claimed to be where John received the Revelation.

Enjoy the amenities of the ship as you spend a day at sea. 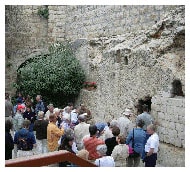 Arrive in Ashdod, Israel and travel to Jerusalem for a full day tour of this holy city. Start from atop the Mount of Olives and walk to down to the Garden of Gethsemane. To walk between the ancient olive trees, read the scriptures of Jesus' prayer and take time for personal reflection is important here. We continue our sightseeing just outside the Dung Gate on the southeastern hill below the Temple Mount in the City of David. It was during the time of Solomon that the city limits extended past this part of Jerusalem. We visit Gihon Springs, the original water source for Jerusalem, view new excavations including a typical Israelite four-room house, and the lower city wall. A highlight today will be a water walk through the incredible Hezekiah's Tunnel to the pool of Siloam, the place of Jesus' miracle in John 9. Continue to the Old City section to see the Western Wall and take a walk in the tunnels under the walls. The climax of the day is the area of Golgotha (place of the skull) and the Garden Tomb, where we celebrate the resurrection with communion and a time of praise. Return to the cruise ship. 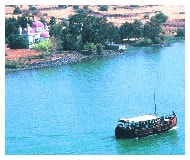 Arrive in Haifa, Israel and travel to the Galilee region of the country where Jesus spent most of his life and performed many of his miracles. We visit the Mount of the Beatitudes. In Capernaum we view the excavations of the sea-side village and Peter’s home, followed by a visit to Magdala, home town of Mary Magdalene. The recent excavation of the First Century Synagogue and well preserved village makes Magdala one of the most interesting Biblical sites in Israel. We enjoy a St. Peter’s Fish Lunch (other selections available), we then visit the ancient Fisherman Boat followed by a relaxing cruise on the Sea of Galilee. A brief scripture reading and devotional on board brings to life the experiences of Jesus and the fishermen disciples. If time allows we will make a stop at Mt. Carmel on our way back to the cruise ship.

Arrive in Limassol, Cyprus and enjoy time to explore on your own or to take an optional cruise excursion.

Arrive on Santorini which is perhaps the most breathtaking of all the Greek Islands. You will have time to explore on your own or to take an optional cruise excursion.

Disembark the cruise ship at the port of Piraeus (just outside of Athens, Greece).

Transfer to Athens to visit the Temple of the Olympian Zeus, Hadrian’s Arch, and Syntgma Square including the magnificent Parliament building. You will have free time to shop this afternoon. The Plaka district is recommended for great shops and cafes. Dinner is included at the hotel.

Transfer to the Athens airport for the flight home.