Enjoy your overnight flight to Frankfurt with dinner en route. 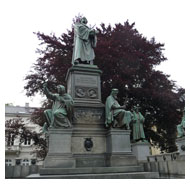 Upon arrival in Germany, we travel on to one of the most charming cities in all of the world - Heidelberg, ancient capital of the Palatinate and home of Germany's oldest university. But most importantly, it was a stronghold of German Reformed Protestants beginning in 1560. One of the great confessional statements of the Reformation, the Heidelberg Catechism was produced here in 1563. Heidelberg Castle, a most impressive historic landmark of Germany, stands majestically overlooking the Neckar River. The structure, now largely in ruins, preserves numerous examples of Medieval, Renaissance, and Baroque German architecture. Our next stop is in Worms. It was here, during the Imperial Diet in 1521, that Martin Luther challenged the entire Roman Catholic establishment by his refusal to recant the great doctrines of Protestantism. It was also here that William Tyndale completed the printing of his English version of the New Testament in 1525 which he had begun in Cologne. After seeing St. Peter's Church and the symbolic Luther memorial near the town square, we will return to our lodging for the evening in Wurzburg.

Day 3: Rothenburg on the Tauber, Augsburg

This morning, one of the highlights of your trip will be a visit to the best preserved Medieval town in all of Europe, Rothenburg. What a delightful day you will have visiting the quaint Rathaus (town hall) with its tower, the Kriminal-museum, housing all manner of Medieval instruments of torture and especially for the ladies, one of the most fascinating Christmas stores you will ever see - Kathe's (pronounced Katie's). After lunch you will travel south to the ancient city of Augsburg. It was here in 1518 at St. Anne's Church that Luther met the papal legate, Cardinal Cajetan, who demanded that Luther submit to the pope. Augsburg was also the site of another Imperial Diet (1530) at which Protestants presented their confession, the foremost doctrinal statement of the Lutheran church. In the town hall the Peace of Augsburg was signed in 1555 ending for a time the religious wars in Germany between the Catholics and the Protestants. Overnight in Augsburg for the next two nights. 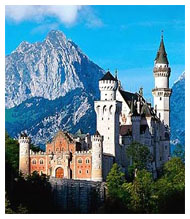 Continuing further south today, we stop at Oberammergau, site of the famous Passion Play and magificently painted houses, on your way to the Rococo-style Chapel in the Meadow and Ludwig II's most luxurious former residence, the Neuschwanstein Castle. This afternoon's adventure takes us to the little hamlet of Eibsee where we climb into a modern cable car that will take us to the summit of the tallest mountain in Germany, the Zugspitze. Here it snows year round, so you will need a sweater, but the panoramic view will warm your heart. It is absolutely spectacular!

Traveling westward brings us to a resort town on the border of Germany and Switzerland, Constance. Some historians suggest that it is here that the Reformation actually got it's start in 1415, with the execution of Bohemian reformer John Huss. You will see the house in which he faced his accusers and the place just outside the main town where he was burned at the stake. On the way to a new country on the tour, Switzerland, you will stop near Schaffhausen to view the Rhine Falls, the most powerful waterfalls in Germany. This is definitely a "Kodak moment". Overnight in Zurich. 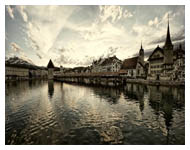 Zurich is definitely a combination of the old and the new. It is divided (as are many European cities) into the modern cosmopolitan district and the Auld Stadt (old city). Most of the time during your stay will be spent seeing the sights connected with Ulrich Zwingli. It was in Zurich where the Reformed branch of the Reformation got its start under his leadership beginning in 1520. Today you will see his monument, the church where he was pastor (the Grossmunster), and the Guild Hall and Museum in which you will find artifacts and works of art associated with the Reformation. Zurich is also the origin of the Swiss Brethren Anabaptist Movement. It had its start in the home of Felix Manz in 1525. Its location is a few blocks from Zwingli's church. This afternoon we travel on to lovely Lucerne for a fjord-like lake cruise and free time in the historic cobblestone shopping district to shop for watches. 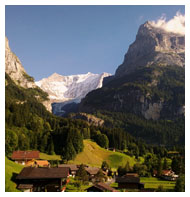 Enjoy a brief walking tour of historic Lucerne displaying Medieval heritage every step of the way. See the impressive city walls, the famous covered wooden bridge, ornate patrician houses lining cobbled streets, and Thorwaldsen's masterful Lion Monument. Next we travel on to Interlaken, a Bernese Oberland resort beautifully situated between two lakes and beneath the towering Jungfrau. If the weather is right our motorcoach will wind it's way to the mountain village of Grindenwald where we have free time to walk the trails with spectacular mountain and glacier vistas. Free time will be allowed to explore through the woodcarving shops of Brienz before we continue on to our lodging for the evening in Berne.

Berne, Switzerland's capital, is a wonderfully preserved Medieval town and one of the earliest cantons to embrace the Protestant Reformation due mainly to the influence of Zwingli. Sightseeing with a local expert starts at the popular BEAR PIT and then focuses on the monumental Federal Palace and the beautifully preserved medieval Old Town. Witness the hourly parade of painted figures at the Clock Tower and take your pictures of ornate, flower-adorned fountains. The next highlight today will be a visit to the much photographed Chillon Castle, the 12th-century water fortress near Montreaux. We continue our tour along the upper ridge of placid Lake Leman (Lake Geneva). There will be stops along the way to freshen up and take in this extraordinarily beautiful site. Finally you will come to the south end of this magnificent lake and encounter the city known to Protestants as the "Town of Calvin" - Geneva. Overnight two nights in Geneva.

The grand finale of our tour will be the historic city of Geneva. We begin sightseeing at St. Peter's Cathedral, where John Calvin taught the doctrine that made him famous throughout the Protestant faith. Other Reformation sites of interest include Calvin's Academy, the Reformation Monument and the Reformation Museum. We'll also take a walk by the Flower Clock and Gardens before returning to our hotel for dinner and overnight.

Arrival back in our home town is scheduled for mid-afternoon. Breakfast included.