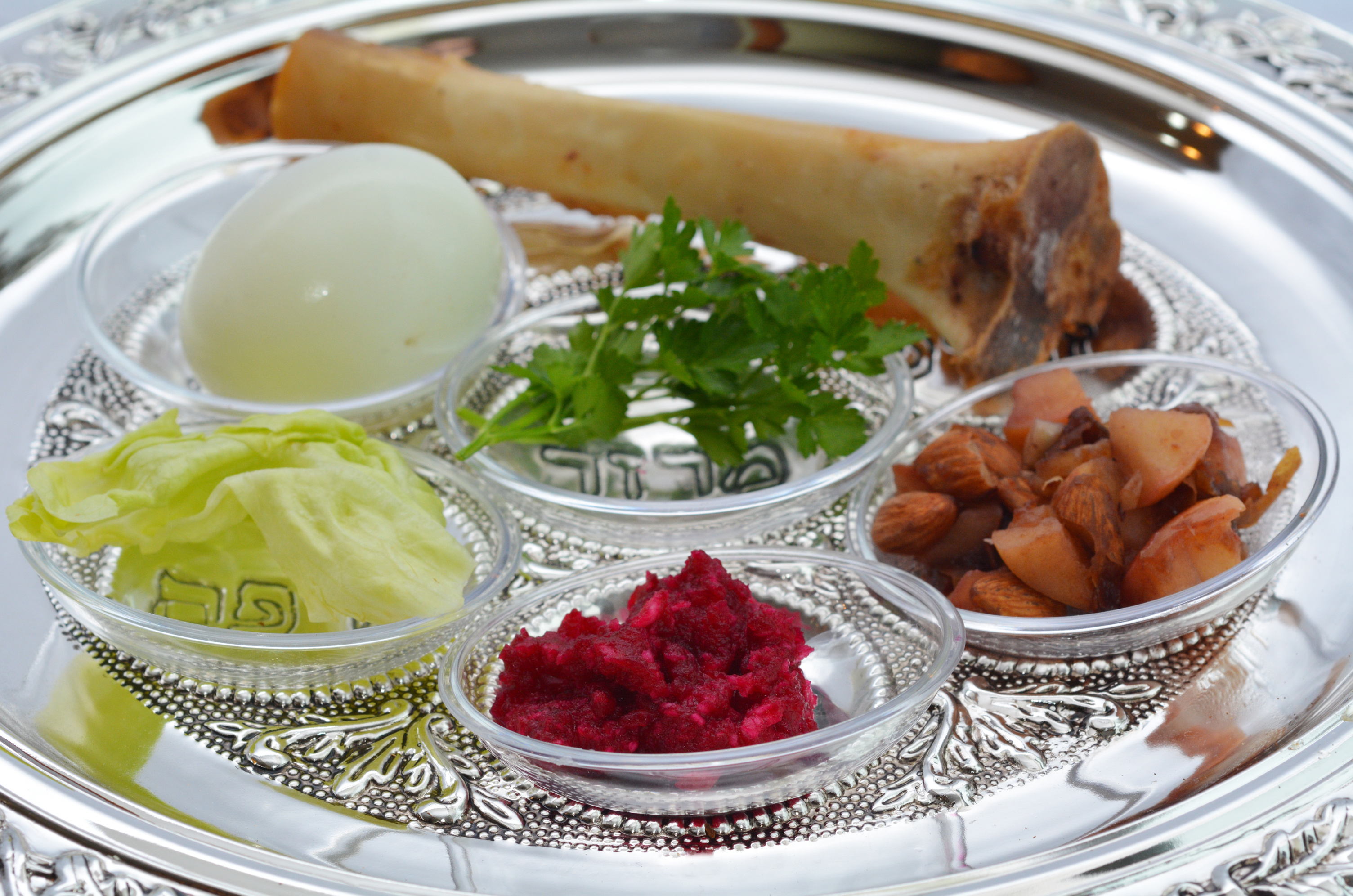 On a cloth or plate placed above three Matzahs, are placed the following items:

Zeroa (The Shank bone) - A piece of roasted meat represents the lamb that was the special Paschal sacrifice on the eve of the exodus from Egypt, and annually, on the afternoon before Passover, in the Holy Temple. The shank bone is not eaten.

Baytza (The Egg) - There are two interpretations of the symbolism of the hard boiled egg. One is that it is an ancient fertility symbol. The other is that it is a symbol of mourning for the loss of the two Temples, the first of which was destroyed by the Babylonians in 586 B.C.E. and the second of which was destroyed by the Romans in 70 C.E. Hard boiled eggs were traditionally the food of mourners and hence they were an appropriate symbol for the loss of these sacred sites.

Maror (The Bitter Herbs) - Bitter herbs remind Jews of the bitterness of the slavery of their forefathers in Egypt. Fresh grated horseradish, romaine lettuce, and endive are the most common choices.

Charoset (The Mixture) - This is a mixture of apples, nuts and wine which resembles the mortar and brick made by the Jews when they toiled for Pharaoh.

Karpas (The Vegetable) - Garden greens, usually parsley, celery, lettuce, or other leafy green vegetable such as watercress are used in the Seder meal. The greens are dipped in a small bowl of salt water, recalling the hyssop dipped for sprinkling on the door posts of Hebrew dwellings in preparation for the Exodus (Exodus 12:22).

Chazeret (The Bitter Herbs [Lettuce]) - The lettuce symbolizes the bitter enslavement of our fathers in Egypt. The leaves of romaine lettuce are not bitter, but the stem, when left to grow in the ground, turns hard and bitter. So it was with our enslavement in Egypt. At first the deceitful approach of Pharaoh was soft and sensible, and the work was done voluntarily and even for pay. Gradually, it evolved into forced and cruel labor.

Other Elements of the Seder meal:

Matzah - the unleavened bread that the Israelites took with them when they escaped from Egypt. The Bible records that the people had no time to bake bread with leaven (yeast) and so they made Matzah, a simple mixture of wheat and water in the form of a flat wafer that bakes quickly.

Three Matzahs (unleavened bread in the form of large crackers, typically square and corrugated) are placed on top of each other on a plate or napkin, and then covered. (Some also have the custom to separate the Matzahs from each other with interleaved plates, napkins, or the like.) The Matzahs are symbolic of the three castes of Jews: Priests, Levites, and Israelites. They also commemorate the three measures of fine flour that Abraham told Sarah to bake into Matzah when they were visited by the three angels (Genesis 18:6). On a practical level, three Matzahs are needed so that when Jews break the middle matzah, they are still left with two whole ones to pronounce the hamotzi blessing (as required on Shabbat and holidays).

Wine (or grape juice) - tradition is to drink four glasses of wine during the Seder to symbolize the Jewish people’s trust in God’s fourfold promise of redemption:

“I am the LORD, and I will bring you out from under the yoke of the Egyptians, I will free you from being slaves to them, and I will redeem you with an outstretched arm and with mighty acts of judgment. I will take you as my own people, and I will be your God.” (Exodus 6:6-7)

Elijah’s Cup - a fifth glass of wine, which is filled only at the conclusion of the Seder, and which represents the fifth stage of God’s promise of redemption: "And I will bring you into the land I swore with uplifted hand to give to Abraham, to Isaac, and to Jacob." (Exodus 6:8).

According to Jewish tradition, the fifth glass is poured, but not drunk from to symbolize that God’s promise for the Jewish people’s return to their homeland remains unfulfilled. It is called Elijah’s Cup since, according to tradition; it is the prophet Elijah who will usher in the Messiah and the ingathering of Jewish people into Israel.

Pillow - traditionally the leader and/or participants recline while partaking of the Seder, as was the manner of Roman emperors, to demonstrate their freedom on this day.

How these items were fulfilled in Christ

Zeroa (The Shank bone) - The unbroken, unblemished shank bone reminds us of Jesus’ crucifixion in that it always remains an unbroken bone. During Roman times, ALL crucified people were to have their leg bones broken, but God gave the Messiah’s unbroken legs as one of the signs of His identity because the Passover Lamb’s bones were never broken (Exodus 12:46 and Numbers 9:12). Jesus is our Passover Lamb. John 19:36 tells us that these things happened so that the scripture would be fulfilled: “Not one of his bones will be broken.” So, it is that this bone represents first the miracle of the unbroken legs of our Messiah. Second, the shank bone also represents the outstretched arm of Adonai during the first Exodus, but even more astounding it represents how He will deliver us during the second Exodus yet to come. The second Exodus is referred to in Jeremiah 23:7 “So then, the days are coming,” declares the Lord, “when people will no longer say, ‘As surely as the Lord lives, who brought the Israelites up out of Egypt,’ but they will say, ‘As surely as the Lord lives, who brought the descendants of Israel up out of the land of the north and out of all the countries where he had banished them.’ Then they will live in their own land.” So, the shank bone refers to God’s deliverance of His people at both ends of the ages.

Baytza (The Egg) - The egg symbolizes new birth in the Messiah. The doctrine of being born again is a Torah doctrine that is symbolized this way at Passover. Jesus was amazed that Torah teacher and leader, Nicodemus, did not understand this doctrine. John 3:1-10 “Now there was a Pharisee, a man named Nicodemus who was a member of the Jewish ruling council. He came to Jesus at night and said, “Rabbi, we know that you are a teacher who has come from God. For no one could perform the signs you are doing if God were not with him.” Jesus replied, “Very truly I tell you, no one can see the kingdom of God unless they are born again.” “How can someone be born when they are old?” Nicodemus asked. “Surely they cannot enter a second time into their mother’s womb to be born!” Jesus answered, “Very truly I tell you, no one can enter the kingdom of God unless they are born of water and the Spirit. Flesh gives birth to flesh, but the Spirit gives birth to spirit. You should not be surprised at my saying, ‘You must be born again.’ The wind blows wherever it pleases. You hear its sound, but you cannot tell where it comes from or where it is going. So it is with everyone born of the Spirit.” “How can this be?” Nicodemus asked. “You are Israel’s teacher,” said Jesus, “and do you not understand these things?” You see, Nicodemus failed to fully comprehend the complete meaning of the life symbol of the Passover egg. It doesn’t symbolize earthly life, but spiritual life-- the life that is only found by becoming “Ivrit” like Abraham. Abraham was a Gentile who “crossed over” (the meaning of the word Ivrit) from his Gentile ways to God’s ways. The word “Ivrit” is the ancient root word for “Hebrew.”

Charoset (The Mixture) - This sweet mixture represents bitter toil because even harsh labor is sweetened by the promise of redemption. We know that it was through Christ's bitter suffering that the sweetness of redemption also came to us (Hebrews 2:9-10). During the Passover Seder, everyone takes another piece of Matzah with Charoset and feeds it to the person on his right, saying, "Shalom, peace to you." When Jesus brought sweetness into our lives through His forgiveness, He never intended for us to keep it to ourselves. As we feed each other the Charoset, we are showing that we want to pass this sweet message on to others (Matthew 28:19-20).

Karpas (The Vegetable) - As Jewish and Gentile believers in our Messiah Jesus we believe that The Book of John 19:28-29, explains beautifully the aspect of Karpas: “Later, knowing that everything had now been finished, and so that Scripture would be fulfilled, Jesus said, “I am thirsty.” A jar of wine vinegar was there, so they soaked a sponge in it, put the sponge on a stalk of the hyssop plant, and lifted it to Jesus’ lips.”

Chazeret (The Bitter Herbs [Lettuce]) - The bitter root, Chazeret, reminds us that bitterness goes down to the root of our very being and cannot merely be topped off. We are all slaves to sin and bitterness and we will never know the sweetness of freedom until we let the Messiah Jesus uproot the sin in our lives and set us free.

Matzah - Unleavened bread has the properties in its appearance of being beaten, striped and bruised. For the last 3,500 years, these have represented Jesus’ physical state at the time of His crucifixion. Each Seder table is provided with 3 Matzahs hidden in a 3-pocketed napkin (one whole piece of Matzah is placed in each pocket). The 3 Matzahs represent God’s 3 manifestations as Father, Son and Holy Spirit. The first Matzah represents God, the Father. The middle Matzah represents Jesus. At a point during the ritual, middle Matzah is broken, then hidden by adults to be found by children later at a specified time. The Matzah, Jesus who is our unleavened bread, was broken for our sins, wrapped in a white burial cloth, placed in a tomb (hidden), and then arose from the dead (was found again).The hidden Matzah is called the “afikomen”, a Greek word meaning “that which comes last”. It also represents Jesus’ final return to earth. The 3rd Matzah represents the Holy Spirit.

Afikomen - The Jews find this resurrected Christ at the same time that Elijah comes to instruct them. We will find Him, this divine God, when we search for Him with all our hearts.

Wine (or grape juice) - The blood red wine was a symbol of His blood, specifically the blood accepted in Gethsemane and pouring out of His broken heart.

Elijah’s Cup - Elijah has not been invited yet to the supper by the Jews, so Elijah's cup will not be drunk until they recognize the Messiah when they find and unwrap the Afikomen.

Pillow - Christ is the Bread of Life who would recline to be nailed and recline in the grave after making the offering and being swallowed up in death. We should celebrate His death because it set us free from the power and condemnation of sin so that we have rest.