All lunches and drinks with meals except as noted in itinerary, Optional Travel Insurance - 7.6% or 10.25% of tour cost, Testing for COVID-19 or any other related expenses

Today, our exciting journey begins! We take an overnight flight from the states.

We fly into the Rome airport, and transfer to our lodging for the next three nights. This afternoon we will take a tour of the Catacombs where thousands of Christians were buried in a remarkable tiered series of galleries. (B, D)

Our day starts with a visit to the Pantheon, the best preserved ancient roman monument. We begin our walking tour at the ancient Roman Forum, where our guide will divulge its secrets. We will visit the Arch of Titus which commemorated the sack of Jerusalem by Titus in AD 70. We will view the Mamertine Prison exterior, where tradition says the Apostle Paul was imprisoned. The Roman church would say that Peter was imprisoned here as well, but there is no imperial evidence that Peter was ever in Rome. Next, we visit the Coliseum, where thousands of people and animals perished during gladiatorial games. The Coliseum first opened in AD 80 and within 100 days of its opening, 5000 wild beasts perished here. The slaughter of both humans and animals continued for three more centuries. Historians believe the Coliseum could hold between 40,000 and 80,000 people depending on how close the seating was. The floor has recently had a plank placed over the middle making it accessible for people to walk over the labyrinth of brick cells, ramps, and elevators used to transport animals and gladiators into the arena. Hear the stories of the games that have fascinated people for hundreds of years. We conclude our day at the ruins of Ostia Antica, which provides an excellent example of city life in classical times and the Ostian Gate, today called the Gate of St. Paul. (B) 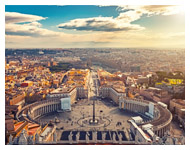 This morning we transfer to the airport for our flight to athens. (B) We arrive in Athens and check into our hotel. You will have the remainder of the day free to relax or take a stroll along the streets of Athens to enjoy the flavor of the city. This evening our group will enjoy the first of many delectable European style dinners. (B)

We sail this morning from Athens to the quaint isle of Mykonos, called the island of windmills. Experience the waterfront lined with shops and cafes and then stroll the charming walkways through a maze of whitewashed buildings before returning to the ship for dinner and evening entertainment. (B, D)

Docking in Turkey, enjoy a tour of Ephesus, the city of the Bible and one of the largest restorations still in progress with miles of ancient treasures. Ephesus was once a thriving port town of 250,000 people. Today you can still see the spectacular excavations of the major streets in this ancient city including the Agora, the Odeon, the Library, the marble-paved main Street, the Baths, Trajan’s Fountain, the Residences of the Patricians, the Prytaneum, and Temple of Hadrian. The Great Theatre, built in the 4th century B.C., could accommodate 24,000 spectators and it is famous even nowadays for its acoustics. This afternoon we visit the Isle of Patmos, under statutory protection as a historic monument. Here we have a tour to see the fortified monastery of St. John and the cave claimed to be where John received the Revelation. Back on the ship, enjoy the Captain's dinner before settling in to your cabin for the night. (B, D)