Upon our arrival in London, our tour director meets us at the airport and we begin our tour at Hampton Court Palace. In 1604, James I commissioned the King James Version of the Bible during the Hampton Court Conference and we visit the room where it happened. In the Chapel Royal, we hear how Henry VIII’s decision to allow production of the Bible was influenced by his last wife, Catherine Parr. After the tour we have time to stroll through the beautiful gardens and try to find our way to the center of the hedge maze. Continue to West Norwood Cemetery and then to the hotel. Our welcome meal is at our hotel this evening. Our hotel is in London for the next three nights.

This morning we visit the Metropolitan Tabernacle, where the great Baptist preacher Charles Spurgeon (1834-1892) preached to as many as 6,000 people every Sunday, with copies of his sermons printed and distributed worldwide. During his lifetime he preached to an estimated ten million people. It’s still a thriving congregation in the center of London and we will attend a Sunday morning service. Next we will visit Wesley’s Chapel, House, and Museum. The Church was built under the direction of John Wesley, founder of the Methodist movement. Today it is a church and museum (donation is requested) with the house right next door. This afternoon we’ll enjoy a visit to Bunhill Cemetery where John Bunyan, Isaac Watts, John Gill and Susanna Wesley are all buried.

Today you enjoy a tour of London with a guide. The first visit will be to the magnificent Westminster Abbey where most British Kings and Queens since 1066 have been crowned and the final resting place of many monarchs, heroes and poets. In 2013, on the 50th anniversary of his death, C. S. Lewis joined some of Britain's greatest writers recognized here at Poets' Corner. Although not open to the public now, we will learn about historic events in the Jerusalem Chamber. It was used by the 17 men who translated the first third of the King James Bible Old Testament and the last half of the New Testament. Between 1644 and 1647, the Westminster Assembly met here to prepare The Westminster Confession of Faith. Next we visit St. Paul’s Cathedral, a marvelous building designed by Sir Christopher Wren and recently renovated to its former splendor. This afternoon we visit the impressive British Library which is the largest in the world by number of items catalogued. Continue to the British Museum which has a collection of over 8 million works that have been secured over the many years of the British Empire.

This morning we travel to Oxford. Here our local guide leads us on a tour including the Reformers Monument and the Cathedral. Famous Oxford alumni include: Charles and John Wesley, Lewis Carroll, William Penn, Albert Einstein, John Locke and C. S. Lewis who was later on staff. It was here that Lewis embraced Christianity, influenced by arguments with his Oxford colleague and friend J. R. R. Tolkien. He fought greatly up to the moment of his conversion, noting that he was brought into Christianity like a prodigal, "kicking, struggling, resentful, and darting his eyes in every direction for a chance to escape”. We begin our C. S. Lewis Tour at the Headington Quarry Church, where Lewis attended and is buried. We continue on to the Eagle and Child pub with its rich and colorful history for lunch. By the 1930s, the pub became one of two gathering spots for Lewis and his literary-minded colleagues and friends known as the Inklings. We also visit the Kilns, house bought by C. S. Lewis, where he wrote "I never hoped for the like." Overnight in Oxford.

This morning we travel to Moulton to visit the Carey Baptist Church where William Carey was the minister from 1786-1789 and today there is a small museum. Continue to Kettering where John Gill was raised. Next we stop in Elstow for a possible visit to Moot Hall (The Green House). It was built as a market place/courtroom but today is a museum. Continue to Bedford to an outside view of the John Bunyan Museum. Bunyan is mostly known as the author of The Pilgrim’s Progress. Overnight in Bedford. 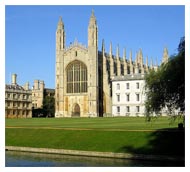 Travel to Olney to visit the Cowper and Newton Museum. This museum celebrates the life and works of William Cowper (poet) and John Newton (slave trade abolitionist). They wrote the Olney Hymns including Amazing Grace. Continue to Cambridge where you have a guided tour to include the Parker Library which holds invaluable rare books and manuscripts including the St. Augustine Gospels. Continue to the Tyndale House which is today a center for Biblical Studies and has housed many famous scholars. Continue to Kings College Chapel to view the impressive architecture. Overnight in Cambourne (near Cambridge).

After breakfast we continue north to York. York today remains as a true representation of medieval England. Taking a guided walking tour through these historic streets we arrive at York Minster, England’s largest cathedral. Inside you view the great stained glass window dating back to 1338 and reputably the size of a doubles tennis court. Enjoy some free time in York and overnight there. 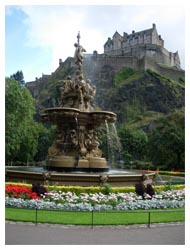 Travel north and cross into Scotland. Continue to Edinburgh. With a guide we visit the 15th century house where John Knox, leader of the Scottish Reformation and founder of the Presbyterian Church, lived for a short time before he died. Today it is a museum that holds an exhibition about his life. Overnight in Edinburgh for 3 nights.

Today we enjoy a guided tour of Edinburgh which takes us to the historic sites of the Edinburgh Castle, the Queen’s Holyrood Palace and points out the Royal Mile. We also visit St. Giles Cathedral to which Knox was appointed minister of the church and listen to the guide’s testimony of Knox’s great personal sacrifice and the contribution of his powerful sermons. Free time will be allowed today for your sightseeing and shopping pleasure.

Today we enjoy a guided tour of St. Andrews whose Royal and Ancient Golf Club, founded in 1754, has given us the rules of golfing. Stroll through the town, walk along the North Sea jetties that border the manicured fairways and visit the ruins of the cathedral, destroyed during the Reformation. We will also visit the St. Andrew’s Castle and view the university. This afternoon we enjoy a tour of Stirling Castle. Stirling is one of the largest and most important castles, both historically and architecturally, in Scotland. The castle sits atop Castle Hill, an intrusive crag, which forms part of the Stirling Sill geological formation. It is surrounded on three sides by steep cliffs, giving it a strong defensive position. Its strategic location, guarding what was, until the 1890s, the farthest downstream crossing of the River Forth, has made it an important fortification from the earliest times. Several Scottish Kings and Queens have been crowned at Stirling, including Mary, Queen of Scots, in 1542. There have been at least eight sieges of Stirling Castle, including several during the Wars of Scottish Independence, with the last being in 1746, when Bonnie Prince Charlie unsuccessfully tried to take the castle. We return to Edinburgh late this afternoon.

We transfer to the Edinburgh airport for our flight home.